skip to main | skip to sidebar

A Presence
When I was six, we moved to a house down a lane, near a canal and Stony Brook. Across the lane was a beautiful pine wood where I went exploring for hours. One summer morning, I came across a pool deep in the woods and had what I would now describe as a mystical experience. I remember the details vividly, and a few years ago I used the experience in my novel Samara the Wholehearted. I had been seven when this happened; Samara was 21. “She pressed on. Abruptly she was there, at the source, a round deep pool. The place was as dark as evening with the spruce coming right down to the edge of the water. The woods here were very still. She hung her knapsack over the limb of a tree and squatted down beside the pool. It was alive with tadpoles. A spring must be feeding this, she thought. There was something not quite right, not quite real about the place. She inhaled an earthy smell and another smell too, like the odour present before it rains. The air thickened; she knew that a presence was there. Her skin crawled. She stood up. The presence was good, she felt, but frightening too, as if a specific personal responsibility was implicit in it. The water and the tadpoles were transfigured into worthiness.” In the novel I changed the pine woods of Massachusetts into the spruce forest of New Brunswick, and I think I added the part about the odour, although I now can’t really be sure. I don’t remember if I told my parents about this, and they are now both dead so I can’t ask them, but I don’t think I did. The encounter made sure that I would always know that there was a presence out there, that the presence was good, but that it also required something of me. Years later when I first read the sentence in the Luke gospel, “For unto whomsoever much is given, of him shall be much required,” it hit me hard.
Posted by Nancy Ruth at 11:18 AM 1 comment: 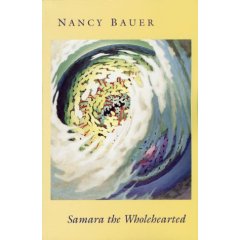 Labels: novels
I am having trouble writing backwards for my blog. What I wrote first goes to the back. In tracing my way from birth, I began at the beginning, logically, but I should have begun with the present. Some novelists write the end of a novel first, then a section in the middle, and only then the beginning. I can’t work that way. The other difficulty I have is comprehending the nature of a possible reader. Last night I was a guest lecturer at a class of second language students, five from China, one from Japan, one from Yugoslavia, who were reading my novel, Samara the Wholehearted. I have talked to the instructor’s class for several years and have had students from Bhutan, Latin-America, Norway – many other places. What do they make of this novel, I always wonder.
Posted by Nancy Ruth at 11:15 AM 1 comment:

Naming
All the people I know have taken great care when they were naming their children. Some have named a child after a member of the family, or some give a name because it sounds good to them – the poetry of it. When the newspaper gives a list of the most commonly used names of the past year, I see that out of nowhere a popular name has arisen. I didn’t know a single Jacob when I was young. Now the name is widely used. A baby’s first word is most often the name of his parent: mama, papa. I agonize over titles for my novels because it is the first hint a prospective reader will have of what is inside. I think the title of my first novel, Flora, Write This Down, was my most successful. The title of my fifth, last novel is too long. In the book of Genesis, God brought each beast and fowl to Adam to name, Adam’s first action. “And whatsoever Adam called every living creature, that was the name thereof.”
Posted by Nancy Ruth at 12:41 PM 1 comment: 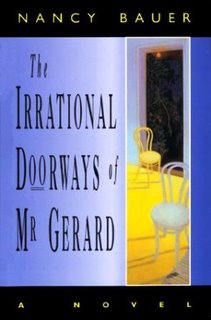 Tracing My Way From Birth

…religions should be conceived as route-finding activities, mapping the general paths along which human beings can trace their ways from birth to death and through death.
Michael Novak

For six months I have been wondering if I could discover what has made me the person that I am. Could I begin at the beginning to figure out how I got this way? For example, I always knew that my mother had named me after a series of poems about Nancy Ruth that appeared first in the Detroit News and were widely syndicated. She had cut out several of these from the local newspaper and put them in my baby book. Later I inherited the papers she stored in her hope chest and was touched to find a letter from the poet, thanking my mother for the picture of me. The poet, Anne Campbell, had typed out seven of the poems that my mother did not have.

I went on the internet to see what I could find out about the poet. Eureka! In a 1947 Time Magazine there was an article about her, “Eddie Guest’s Rival”. Two-fifty got me the whole article. My parents subscribed to Time and probably saw it.

Edgar Guest wrote immensely popular poetry for the Detroit Free Press. Their rival, the Detroit News, needed a poet to compete for circulation. Campbell found out about this need from her husband, George Washington Stark, a News editor. In 1922 she began to write poems for the paper and continued for 50 years. She died in 1984.

I have always known about Nancy Ruth. My parents named my brother after my father, but they needed a name to distinguish the two. Campbell’s Nancy Ruth had a baby brother named Robin so that of course was the nickname given my brother. He is now known as that only by the people who knew him as a child.

How has the name Nancy affected what I have become? It is a serviceable name, plain, bespeaking the 1930’s yet seldom completely out of fashion since then. What do people who have not met me think when they hear my name? And how does my name affect how they treat me once they do meet me? My mother told me that the other name she liked was Dolores, after a movie star named Dolores Del Rio. Dolores slept for 16 hours a day to maintain her beauty.

My father read to us every night and recited poetry to us during the day. Poetry has been a part of my life and my brother’s life from the beginning. Sadly, I am no poet. Just an aficionado.

Now all the tiny growing things,
The birds beneath their mother’s wings,
The setting sun, with dimming light,
Bid Nancy Ruth Goodnight.

Edgar Guest, attending a reception honoring Anne Campbell’s twenty-five years at the Detroit News, said, “There is no one for whom I have greater affection.” Dorothy Parker wrote, “I would rather fail my Wasserman test/than read a poem by Edgar Guest.” I don’t know what Dorothy thought of Anne Campbell, but I can guess.
Posted by Nancy Ruth at 9:44 AM 1 comment: 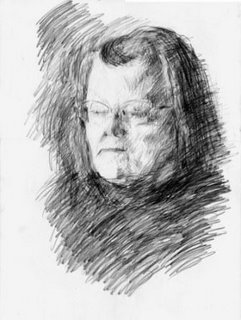 Posted by Nancy Ruth at 9:27 AM No comments: